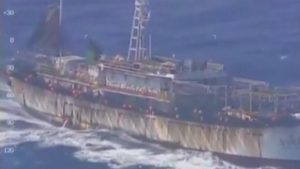 Seven Chinese trawlers were arrested off the coast of Casamance in the southwest of Senegal for illegal fishing activities in the West African nation’ waters, Karim Mara, Captain of the Senegalese navy and responsible for the maritime patrol mission, told local media.

“The trawlers were caught in the flagrant offence of fishing without authorization in Senegalese waters,” Mara said.

The arrest of the Chinese fishing vessels is the second in the West African region after last month’s seizure of eight vessels by Sierra Leone, Guinea-Bissau and Guinea-Conakry authorities.

In West Africa, illegal fishing represents a shortfall of $ 2.3 billion per year, according to a study published in Frontiers in Marine Science.

According to the World Bank, dwindling stocks pose a threat to livelihoods and food security. Some 600,000 people, almost 20 percent of the workforce, work in fishing, and fish accounts for 75 percent of Senegal’s animal protein intake.

In Senegal a mega-trawler can capture up to 20,000 tons of fish a year – equal to the annual catch of more than 1,700 traditional Senegalese pirogues, Karim Mara said.