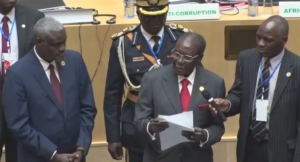 Zimbabwe president Robert Mugabe on Monday handed over a check of $1 million to the African Union, part of efforts to help push the regional block toward financial independence.

About 60 percent of the continental body’s spending has been financed by donors, including the European Union, the World Bank and other international donors and lenders.

Handing over the check, Mugabe said the “modest” donation “demonstrates what is possible when we apply our mind to the most urgent task before us, of funding our union and in particular Agenda 2063.”

The AU hopes to be able to meet all its operational funding needs by the year 2022.

“Unless and until we can fund our own programs, the African Union will not be our own,” Mugabe said.

It is never going to be easy to wean ourselves from the ‘donor-dependency syndrome,’ but we need to forge ahead for our sake and that of our future generations, he said.

The donation comes amid a severe cash and food crisis in Zimbabwe.

During his tenure as AU chairperson in June 2015, Mugabe had pledged 300 cattle from his personal herd towards the capacitation of the then newly formed African Union Foundation, mandated with promoting domestic resource mobilization for African development.

Mugabe honored his pledge Monday by donating the $1 million check.

“As a farmer and an African, donating cattle, which is a sign of wealth, comes naturally,” Mugabe said during the donation.