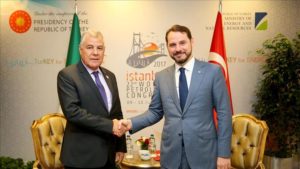 Algeria’s energy minister Mustapha Guitouni stated that they have to “use technology at the optimum level to get better returns” of their oil and gas resources as well as better evaluate them while increasing investment in the oil sector. He revealed that part of the Algerian government’s diversification plan is to increase the amount of energy generated from renewable sources notably solar energy because they want “to improve energy efficiency and reduce energy consumption.” The Algerian minister was speaking at the 22nd World Petroleum Congress when he made these remarks.
His views were supported by the head of Sonatrach, Abdelmoumen Ould Kaddour, who added that despite being determined to increase their effectiveness, investment in the oil sector needs to be done cautiously. “That’s why we must be careful in terms of research. We need to be particularly optimistic about drilling,” he said.With regards to solar energy, the CEO of the state-owned company said work has already begun.
According to the Energy Information Administration, Algeria is the leading natural gas producer in Africa, the second-largest natural gas supplier to Europe, and is one of the top three oil producers in Africa.
The oil market has been struggling over the years. The latest report from OPEC warned that demand for crude oil has been dropping and the trend is expected to continue next year. Algeria’s economy is heavily dependent on the exportation of hydrocarbon.
OPEC Secretary General Mohammad Barkindo however said they remain “very optimistic” in “helping the market to rebalance itself.” Compliance by OPEC members to cut production has fell from 100% to 96% and Barkindo said they are “fully satisfied” with the “very high level of conformity.”