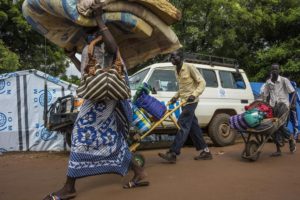 The security situation in South Sudan is still extremely volatile as since the Government announced a unilateral ceasefire in June, active military operations in parts of the country are still reported and the Government seems to have backtracked on its commitment to create an environment conducive for the conduct of the National Dialogue.

The alarm was sounded by UN Assistant Secretary-General for Peacekeeping, El Ghassim Wane, in a briefing before the Security Council on Thursday.

“The security environment remains extremely volatile and South Sudan is in need of an effective and credible ceasefire,” El Ghassim Wane said, noting reports of active military operations in parts of the country since the Government’s announcement of a unilateral ceasefire in June.

Highlighting the challenges facing the world’s youngest country, the UN official underlined that overcoming obstacles borne of a volatile combination of insecurity and political uncertainty is critical for the war-torn country to be put on the track to peace and stability.

In his briefing, Wane also noted that while the Government has publicly expressed its commitment to create an environment conducive for the conduct of the National Dialogue, certain recent decisions seem to contradict those pledges, such as blocking of key media websites after their alleged criticism of the authorities.

“Every effort should be made to ensure that [the Dialogue] is inclusive, transparent, takes place in a free and secure environment, has clear outcomes that complements the ARCISS [Agreement for the Resolution of the Conflict in South Sudan] and is supported by a sufficiently broad political consensus from all political forces in the country,” he added.

The UN official who further noted the importance of an Intergovernmental Authority on Development (IGAD, an eight-country trade bloc in Africa)-led revitalization process, urged the Council to continue its support for the process and called on national stakeholders to embrace it as a genuine opportunity to restore peace in South Sudan.

Concluding his remarks, Wane stressed the importance of the unity in the region and the need for the international community to call on the leadership of all sides in South Sudan that the current situation in the country is unacceptable and unsustainable.

“A change in behavior is long overdue, and the pursuit of political objectives through violence – for which the people of South Sudan continue to bear a heavy toll – should not be allowed to continue,” he stated.