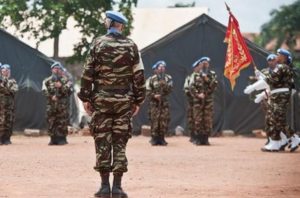 A Moroccan soldier, member of UN peacekeeping mission in Central African Republic (CAR) was killed Sunday in Bangassou, South-East of the country in an attack attributed to Christian-dominated group anti-Balaka.
“A MINUSCA military convoy was target of an ambush se by members on Sunday afternoon in Bangassou,” the UN Multinational Integrated Stabilisation Mission in the Central African Republic (MINUSCA) said in a statement.
The attack also left three other military forces protecting water tanks going to fetch water for the local populations.
The UN expressed its condolences to family of the deceased, reports say.
The Sunday attack adds to a series of recent assaults on the forces and local populations in the region.
Six blue helmets were killed in May in some attacks attributed to the Christian group.
The MINUSCA also on Sunday condemned an attack on Friday on displaced populations camped at the cathedral of the town. The attack reportedly left two children seriously injured.
A Muslim woman was abducted by the group. She was finally released on Saturday after six Christians also kidnapped in the reprisal by Muslims were released, reports say citing UN sources.
Two Moroccan forces were killed in May in the two. The Moroccan contingent has been tasked to protect Muslim population in the South-Eastern town, near the border with Democratic Republic of Congo.
CAR descended into civil war in 2013 following removal of Christian President François Bozizé by Muslim armed group, Seleka.
The civil has left hundreds dead and caused internal and external displacement of refugees.
Violence in capital Banguis has relatively died down since the election of country’s President Faustin-Archange Touadéra’s election in 2016 but the internal part is still embroiled in brutalities between the two religious groups.