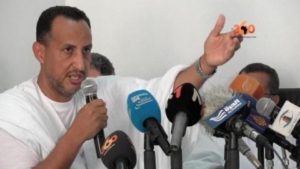 Former senate member Mohamed Ould Ghada, who is one of the harsh critics of President Mohamed Ould Abdel Aziz, will be sued for corruption, the office of Public Prosecutor announced Friday few days after the arrest of the opposition figure.

Ghada was arrested in his house last week by men in plain clothes after being prevented from crossing into neighboring Senegal a day earlier, reports say.

He led the opposition’s boycott of August 5 referendum which parties opposed to the Mauritanian president said was a step towards extending Ould Abdel Aziz’s term.

The Supreme Court has validated the results of the referendum largely dominated by ‘Yes’. The senate has been cancelled and replaced by regional councils. Mauritanians also approved a new flag. The High Court of Justice has been also abolished.