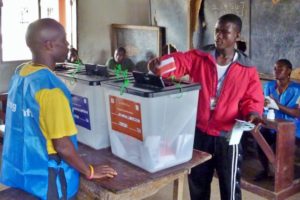 Liberians will go to the polls on Tuesday to elect the successor of President Ellen Johnson Sirleaf, Africa’s first female president.

According to the electoral commission, over 2 million registered voters will also vote for 73 lawmakers out of the 986 aspirants.

Vice President Joseph Nyuma Boakai, representing the ruling Unity Party, and football star George Weah are the front-runners likely to win a place in the run-off.

George Weah, 51, went into active politics as a candidate in the 2005 presidential election but lost to Ellen Johnson Sirleaf in the second round of voting.

In 2011, he run again as a vice-presidential candidate on the ticket of Winston Tubman but failed. He was later elected in the Senate in 2014.

Vice President Boakai, 72, is holding the post since 2006. He was previously the Minister of Agriculture from 1983 to 1985 under President Samuel Doe.

He studied business administration in the United States after early education in Sierra Leone and Liberia.

Liberia gained its independence more than a century before the rest of Africa, and elected its presidents since 1847.

The Tuesday general election is set to be another major test for the troubled nation, as it seeks to manage its own security after United Nations peacekeeping mission pulled out completely two years ago.