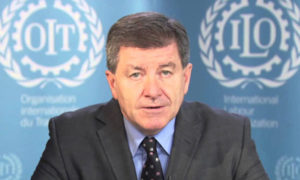 The International Labor Organization (ILO) has urged countries of North Africa to create more job opportunities for the youth in this region suffering from a youth unemployment rate of 28.8 per cent, twice the global average.

“The biggest global development challenge in the decades to come will be the need to integrate hundreds of millions of young people into the labor market”, said ILO Director-General Guy Ryder.

Among those active, 29.3 per cent are unemployed and around 25 per cent of working youth are estimated to be living in poverty.

“In order to fill the youth employment gap in the North African region, we call on social partners, governments, workers and employers’ organizations together with development partners, to renew their commitment and action on youth employment,” said ILO Deputy chief Deborah Greenfield.

The North African population is growing considerably faster and the employment situation of young people is particularly precarious. By the year 2050, the population in this region will double to reach 241 million people, according to UN estimate.

The problem is further exacerbated by the inadequate labor participation rate (people of working age who are economically active), which stands at 51 pc on average in North Africa. This is significantly less than the 67 pc average of all developing countries, a rate that is even outperformed by East Asia’s high 75 pc.

The cause of the low labor participation rate in North Africa is the extremely low share of women (24 pc compared with 52 pc in all developing countries and 67 pc in East Asia).

The skills mismatch, which affects the performance of businesses and public services, is another impediment to employability in this region.

About Khalid Al Mouahidi 3675 Articles
Khalid Al Mouahidi : A binational from the US and Morocco, Khalid El Mouahidi has worked for several american companies in the Maghreb Region and is currently based in Casablanca, where he is doing consulting jobs for major international companies . Khalid writes analytical pieces about economic ties between the Maghreb and the Mena Region, where he has an extensive network