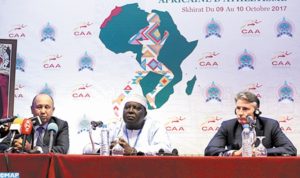 King Mohammed VI has stressed the importance of the contribution of the African youth to the socioeconomic development of the African continent through the implementation of a strategy believing in the youth’s talent and honing it to be more productive.

“I believe that the genuine sustainable development of African sister nations unquestionably hinges on mustering the energies of young Africans, who account for two-thirds of the continent’s population”, said the Moroccan monarch in a message addressed Monday to the participants in the 27th Congress of the Confederation of African Athletics convened in Skhirat (Rabat outskirts).

“The task of providing these young people with proper training and coaching in the fields of education and culture, among others, lies with us”, added the Sovereign in his message read out by royal advisor Abdellatif Menouni.

“Sport in general – and more so, athletics – is one of the means whereby African youths can fulfill themselves and achieve their socio-economic integration. It can also make them more effectively immune to all forms of delinquency and radicalism”, underlined the royal message.

“Sport is not just about titles and achievements. It is a fully-fledged system involving values and principles. It contributes to disseminating a culture of mutual understanding and coexistence – a culture of respect for others and of close interaction between peoples”, explained King Mohammed VI, noting that sport, like school, should be a means for education, refinement and social advancement.

He cited in this regard the importance of athletics which has been, for decades, a deeply-rooted sport in Africa. In many events, African athletes have been the best in the world, “thrilling us all with new records and superb performances”, said the Monarch.

The titles achieved by African athletes and the top positions secured by their countries – be it in IAAF World Championships or the Olympic Games – “are not merely a source of pride for African peoples. These performances also enhance the African identity, make the continent better known and increase its influence”, went on to say the royal message.

Yet, these achievements and sport feats “should not obscure the fact that, by and large, track and field in our African countries remains structurally dysfunctional. Such a situation can be overcome only if we adopt a well thought-out strategy to keep abreast of successive developments in world athletics”, underlined the Moroccan monarch.

He called on African sports officials and decision-makers to draw up strategy “based on good governance, the honing of talents, capacity building through modern training and coaching systems, besides the consolidation and upgrading of sport infrastructure, stressing the need to reconcile grassroots athletics with elite track and field.

The strategy should also embrace the private sector through effective partnerships that provide the financial resources for the development of athletics, said King Mohammed VI, noting that this is a real issue for a number of African countries.

He recalled in this regard the experience of Morocco which adopted a contract program for the development of track and field. Based on a strategic vision, this program aims to increase the number of active athletes while also training elite competitors.

Thus, “I call for consolidating training and capacity building systems and developing the necessary infrastructure based on modern, sophisticated work methods to accompany athletes properly and ensure optimal use of the resources available”, added the Moroccan Sovereign, saying it is also important to combat doping in sport which undermines the values of sportsmanship and fair competition.