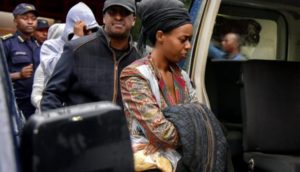 A court in Rwanda has denied a bail application for Paul Kagame’s critic Diane Rwigara, her mother and sister detained in the East African nation since September 22, local media reports.

Diane Shima Rwigara, 35, a leading critic of President Paul Kagame, has been charged with inciting insurrection after she was barred from challenging Kagame in last August elections. She is also accused of forging the registration papers for the election.

Rwigara’s mother Adeline and Sister Anne have also been charged with incitement, “discrimination and sectarianism”. The trio have said charges against them are politically motivated.

Rwigara was the only female challenger in August elections, which Kagame won by a landslide 98.8%.

Kagame enjoys huge popularity in Rwanda, which has seen strong economic growth in recent years and improved standards of living.

The former military strongman is praised for turning around the country’s fortune. But rights groups say he has muzzled independent media and suppressed opponents.

Human Rights Watch (HRW), in a report titled “Rwanda Post-Election Political Crackdown” and released at the end of September, accused the Rwandan authorities of arresting, forcibly disappearing, and threatening political opponents since the August 2017 presidential elections.