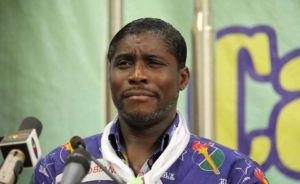 A French court has found Teodorin Obiang Nguema, the son of Equatorial Guinea President guilty of corruption in a case known as the ‘ill-gotten assets’ saga.
Teodorin Obiang Nguema who is also the vice president of his father in the central African nation, was sentenced to five years on Friday.
He is accused of buying a mansion and sports cars in France with a fortune amassed from oil-rich Equatorial Guinea’s public funds.
Mr Obiang’s six-storey Paris villa, estimated to be worth more than $100m, is located on Avenue Foch, in one the most prestigious neighbourhoods of the French capital.
According to the prosecutor, aside the confiscation of the Nguema’s properties and the jail term, he should also be made to pay a fine of over 30 million euros.
Last year, Swiss authorities seized 11 cars belonging to Mr Obiang, accusing him of money-laundering.
Prosecutors in Geneva say he has plundered his country’s oil wealth to buy luxuries, including a private jet and Michael Jackson memorabilia.
Mr Obiang, 47, was promoted in June by his father to be vice-president.
Equatorial Guinea is an oil-rich former Spanish colony, where more than half of the country lives in poverty.
Obiang, who seized power in a military coup in 1979 was re-elected again in April 2016 with 93.7% of the vote.