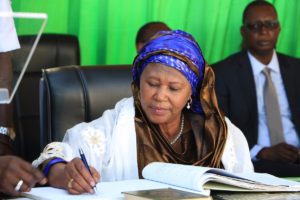 Fatoumata Jallow-Tambajang was named in January after President Barrow won the presidential election in the West African tiny nation against Yahya Jammeh.

The appointment was, however controversial as she was said to have exceeded the age limit to hold the office according to the Gambian constitution.

In a message posted on twitter, Adama Barrow described Jallow-Tambajang as “a woman with wealth of experience highly required for rebuilding the New Gambia”.

Fatoumata Jallow-Tambajang was adviser to the first president of The Gambia, Sir Dawda Kairaba Jawara, on women and children’s affairs, and Yahya Jammeh’s minister of health, social welfare and women’s affairs, 1994-95.

She had also worked with the United Nations Development Program as a gender and development expert.

As a prominent pro-democracy activist, she has been instrumental in successfully bringing the fragmented opposition parties to come together to form a formidable coalition to challenge veteran president, Yahya Jammeh.