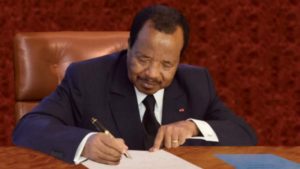 The Cameroonian government on Wednesday, returned to the regional market of the Bank of Central African States (BEAC) to raise a 10 billion CFA francs loan. The treasury bills will have maturity of 13 weeks, officials said.

Since the beginning of this year, this is the first issue of T-Bills, over 7 billion CFA francs.

According to the Cameroonian minister of Finance, the central African nation’s economy is set to expand 6 percent this year even as it imposes new taxes to compensate for a decline in government revenue from oil.

This year’s budget was calculated on an average oil price of $40 per barrel, with income from crude accounting for 25 percent of the 2016 budget.

The economy is forecast to expand by 4.8 percent in 2017, according to the International Monetary Fund.

According to the state-run Cameroon Tribune newspaper, next year’s budget will be executed within a very special context.

The budget is supposed to finalize the Triennial Emergency Development Plan (PLANUT), 2016-2018, for the acceleration of economic growth as well as address the completion of preparatory works for the 2019 African Nation Cup to hosted by Cameroon.