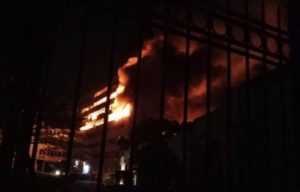 The third and fourth floors of the main building of Cameroon’s parliament in Yaoundé caught fire overnight on Thursday, local media reported.

Pictures posted on social media by the state-run broadcaster, CRTV, appeared to show a large part of the building had been damaged.

The National Assembly of Cameroon is, since Tuesday, in ordinary session to examine the 2018 Finance bill, in a context marked, for more than one year, by the Anglophone crisis.

Since November, the Anglophone minority in the central African nation has been protesting against perceived discrimination, especially in education and the judicial system.

MPs of the leading opposition party, Social Democratic Front (SDF) of Cameroon, have boycotted the opening ceremony of the 3rd parliamentary session earlier this week.

The MPs announced their strike action during the committee deliberations and the various plenary sessions to push the government to find a definitive solution to the Anglophone crisis.

The party has always been steadfast in calling for a federal government comprising two states. The government has however always argued that Cameroon deserves to remain a one state decentralized government for efficient development.

United Nations Secretary-General Antonio Guterres urged all parties to the dispute to refrain from actions that could heighten tensions.