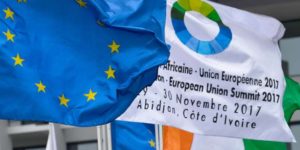 Attended by 83 Heads of State representing all African countries and 28 European countries, the high-level meeting on Wednesday has focus on economic opportunity for young people, as well as climate change issues, followed by sessions on mobility and migration, and peace and security.

The issue of migration was also high on the agenda as the summit took place after the CNN video footage showed an auction in Libya where African migrants were being sold as slaves.
During the discussion on Wednesday, the panellists and delegates have once again explored ways to reinforce existing measures to curb the illegal immigration of young Africans to Europe.

The EU has called on Africa and European nations to endorse a position paper on migration to complement the ‘Continental Dialogue on Migration and Mobility’ proposed by the AU. The EU leaders want to see more progress on border security and AU states accepting people deported from the EU.

African leaders urged the EU to do more to offer legal pathways for people seeking short-term stays in Europe.

Note that The EU’s latest policy tool is the External Investment Plan, a €4.1 billion ($4.8 billion) initiative to draw private investment onto the African continent.

The joint task-Force is expected to include 5,000 personnel across five countries to counter terrorism, fight organized cross-border crimes, and reduce human trafficking.

EU High Representative for Foreign Affairs and Security Policy and Vice President of the European Commission Federica Mogherini underlined the need for the two unions to meet on a regular basis to ensure the implementation of the decisions taken during the summits.

On the sidelines of the summit, the United Nations, the European Union and the African Union have agreed to set up a joint Task Force to save and protect lives of migrants and refugees along the routes and in particular inside Libya.

The decision was made Wednesday at a meeting of senior of-ficials of the three organizations, in addition to delegates of France, Germany, Italy, Spain, Chad, Congo, Libya, Mo-rocco and Niger.

The meeting discussed concrete steps to address jointly the dramatic situation of migrants and refugees, victim of criminal networks, primarily in Libya.
According to a joint UN-EU-AU statement, the task force will also accelerate the assisted voluntary returns to countries of origin, and the resettlement of those in need of international protection.

This action will build on, expand and accelerate the ongoing work done by countries of origin, and the IOM, with EU funding, which allowed so far the voluntary return to their countries of origin of 13 000 migrants since January, the statement said.