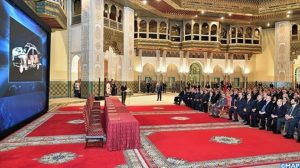 Morocco on Monday once more confirmed its position as a most attractive location for the car industry with the announcement of 26 new investments in the sector worth more than €1.2 billion.

The 26 new investment projects, which will introduce new knowledges in the country strengthen local integration, and supply car parts and equipment that were so far imported, were launched at a ceremony in Casablanca held under the chairmanship of King Mohammed VI, who had drawn few years ago a strategy for the development of the Kingdom’s industrial sector.

Six out of the 26 investment projects announced Monday are part of the implementation of the Ecosystem of French car manufacturer Renault, which is developing a global supply platform from the Kingdom.

Thanks to this large-scale ecosystem, the French group is currently supplying Morocco-made machined parts worth one billion euros per year and achieves a local integration rate of 55%.

The French automaker Renault has two vehicle assembly plants in Morocco, one in Tangier and one in Casablanca. The Tangier plant produced, earlier this year, its millionth vehicle since opening in 2012.

Thirteen investment projects will be conducted within the framework of the PSA Peugeot Ecosystem, which requires a new development for the entire sector to help in the emergence of an industrial pole of excellence in the city of Kenitra, 40 Km to the North of Rabat. The Kenitra plant will start building cars in 2019.

Five other investments are part of the activities of the Ecosystem “cabling and connectivity”, launched in October 2014 and two investments will go to the Valeo Ecosystem.

These new investments in high added-value activities confirm the confidence of international investors in Morocco and attest to the change of the industrial dimension in the country, which is becoming a solid economic model, said Minister of Industry, Investment, Trade and Digital Economy, Moulay Hafid Elalamy, during the ceremony.

The development of the car industry in Morocco over the recent past years was made possible, notably thanks to the Industrial Acceleration Plan, launched in April 2014, under the aegis of King Mohammed VI, and to the accompanying measures, particularly in terms of training, for an optimal implementation of this ambitious plan, the Moroccan official recalled.

“The Industrial Acceleration Plan and the ecosystem approach are real leverages for the industrial acceleration,” he noted, adding that the 26 investments launched in the automotive industry are introducing new specialties in Morocco and reinforcing local integration.

These new investment projects will create 11,568 direct jobs, and will enable the production of aluminum wheels, dashboards, bumpers, seats and electromechanical boxes.

The automotive industry in Morocco is gaining momentum and growing at a rapid pace due to incentives and competitive factors attracting more and more investors and makers of car parts.
These factors include Morocco’s proximity to European markets, modern infrastructures, free trade zones, qualified cheap manpower, open economy and stability.

The development of the automotive industry in the country is expected to create 90,000 jobs by 2020 in addition to the 100,000 already created.

The government also aspires to increase the proportion of locally produced components in exported cars from 40 pc to 65 pc by the end of the decade. So, the new projects announced Monday will help fulfil this target.