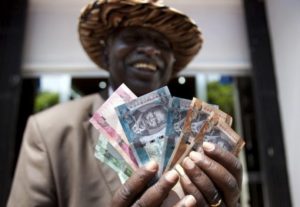 Sudan and Saudi Arabia will soon re-establish banking relations, to help restore confidence in Sudan’s economy after the lifting of U.S. economic sanctions, the state-run news Agency, SUNA, reported.
According to SUNA, the two nations have signed an agreement in Riyadh to allow banking transactions between the two countries. United States has lifted decades-old sanctions against the Sudan in October.
The financial sanctions had put limits on international banking transactions and the exchange of technology and spare parts, and imposed other trade rules that stymied growth and left hundreds of Sudanese factories shuttered.
Washington’s move was greeted in Khartoum with hopes for an economic upturn amid double-digit unemployment rates. The Sudanese pound has plummeted against the dollar since Washington lifted its trade embargo, Reuters reported.
Sudan said earlier this week it would devalue its currency to 18 pounds to the U.S. dollar. The war-torn nation hopes to see its economy grow by 4 percent in 2018, down from a projected growth of 6.4 percent for 2017.
The International Monetary Fund has called on Khartoum to lift its peg on the pound to attract investment and boost growth.
As a reminder, Sudan’s economy has been struggling since the south seceded in 2011, taking with it three-quarters of the country’s oil output.