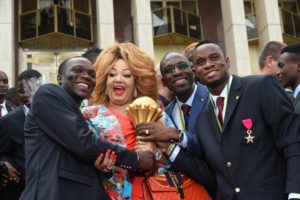 Cameroon president Paul Biya in his End-of-Year address to the nation reiterated that the central African nation will be ready to host the next African Cup of Nations (AFCON) slated for 2019.
The 84-year old leader said he had personally made a commitment to that effect as that Cameroon will put its best foot forward come 2017.
Last week, Confederation of African Football Association (CAF) president, Ahmad, has reiterated his warning to Cameroon about their hosting of the Africa Cup of Nations.
Cameroon once again insisted it would be ready to host the tournament soon after CAF moved it to June/July and increased it from 16 to 24 teams.
The president of the Royal Moroccan Football Federation Mr Faouzi Lekjaa has announced that Morocco will be ready to host the 2019 Africa Cup of Nations if original hosts Cameroon fail to meet the new hosting requirements.
Lekjaa who was speaking in an interview with the Moroccan newspaper L’Economiste, said the North African Kingdom will not hesitate at all for a second chance to host the AFCON.
In 2015, because of the Ebola epidemic, Morocco could not host the tournament.
Note that The Indomitable Lions of Cameroon – the national team – are the reigning AFCON champions having won their fifth trophy in February 2017 in Gabon.