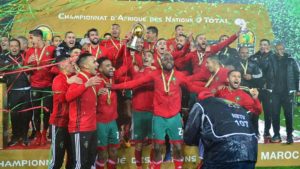 The Atlas Lions of Morocco on Sunday made history in the Championship of African Nations (CHAN) tournament thanks to a 4-0 thumping of Nigeria’s Super Eagles Team in a final match at the Mohammed V Stadium in Casablanca.

The home-based team of the Atlas Lions became the first champions to win five of six matches after defeating Mauritania, Guinea, Namibia and Libya before overwhelming Nigeria.

The North African country is also the first nation to host and win the tournament reserved for players playing in their home countries.

The Atlas Lions dominated the Sunday match from the first minute, pressurizing Nigeria’s defense with several marauding runs down the flanks.

Zakaria Hadraf gave the host a first half lead in the 45 minutes, before Walid El Karti, Zakaria Hadraf and Ayoub Kaabi scored in 61st 64th and 73rd minutes respectively.

It is the first time Nigeria reaches the final in the competition since its inception in 2009 with the only success being a third-place finish in 2014 under late coach, Stephen Keshi.

The win of the Atlas Lions and the good organization of CHAN-2018 may increase Morocco’s chances in its bidding to host the 2026 World Cup tournament. The United States, Canada and Mexico that put forward a joint bid are the only challenger.

The World Cup has only been hosted once in Africa – in South Africa in 2010 – and this will be Morocco’s fifth bid.

According to President of the African Football Federation, Ahmad Ahmad, Morocco has proven its capacity to host major sports events like the World Cup.