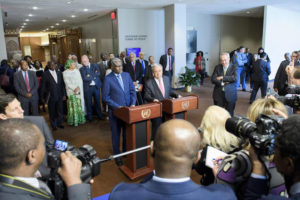 e top leaders of the African Union and the United Nations on Saturday expressed concern over the prolonged political crisis in Guinea-Bissau, condemning the recent actions taken by the authorities to prevent a political party from holding its conference.

“The Chairperson of the African Union Commission, Moussa Faki Mahamat, and the Secretary-General of the United Nations, António Guterres, express concern over the protracted political crisis in Guinea-Bissau despite the multiple opportunities offered to the main political stakeholders to arrive at a consensual arrangement,” said an AU-UN joint statement.

“They condemn the recent actions taken by the national authorities to prevent the African Party for the Independence of Guinea and Cabo Verde (PAIGC) from convening and holding its Party Congress, including the directive given to national security services to evacuate and shutter the party’s headquarters,” the joint statement added.

Faki Mahamat and Guterres called on all relevant authorities to adhere strictly to international human rights and humanitarian law and to immediately remove all restrictions on the right to peaceful assembly, political participation and freedom of speech.
They fully endorsed the recent decisions on Guinea-Bissau taken by the Economic Community of West African States (ECOWAS) on January 27 and endorsed by the AU on January 29 during the African Summit.

They also supported the measures being taken by ECOWAS against “political obstructionists” in the country, welcoming the communiqué issued by the ECOWAS ministerial mission that visited Guinea-Bissau last week.

The two men, who reiterated their endorsement of the centrality of the Conakry Agreement of 14 October 2016, which, inter alia, provides for the appointment of a consensual Prime Minister, called on the main political stakeholders to faithfully and urgently implement this Agreement, as well as the ECOWAS Roadmap they have all signed up to.

They reaffirmed their commitment to continue to closely follow all political developments and to support ECOWAS in its efforts to ensure a swift resolution of the protracted crisis in Guinea-Bissau, and stand ready to employ additional measures, should the situation require it, the joint statement pointed out.