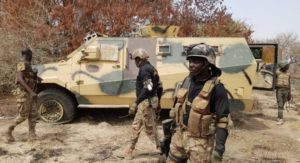 The controversial leader of the terrorist Boko Haram group, Abubakar Shekau, has reportedly succeeded to escape as the Nigerian army on Tuesday cleared out a key base of the insurgent group at the Sambisa forest, the last known hideout of the insurgents, the army said in a statement.

Abubakar Shekau was last seen dressed as a woman in a black hijab, the Army said.

While concerted efforts are ongoing to track and apprehend the fugitive terrorist leader, the army implored members of the public, especially the residents of Adamawa, Borno and Yobe States to be more vigilant, security conscious and be on the lookout of Abubakar Shekau and other terrorists that might disguise as women to escape.

According to the statement signed by Colonel Onyema Nwachukwu, the‎ deputy Director of Public Relations of Theatre Command Operation LAFIYA DOLE, the army dislodged Boko Haram terrorists from one of their highly fortified hideouts at around S-Shape part of the Sambisa forest.

The troops have also rescued 46 captives held by the insurgents in its Operation Deep Punch aimed at clearing remnants of Boko Haram elements.

President Muhammadu Buhari Tuesday in Abuja said with the narrowing of the recruitment base of insurgents and the renewed onslaught on Boko Haram by the Nigerian Army, the days of the terror group were numbered.

Buhari, who made the remarks while receiving the letters of credentials from Apostolic Nuncio of the Holy See to Nigeria, said the terror group had lost host of its initial strongholds, which according to him, had forced it into a steady retreat.