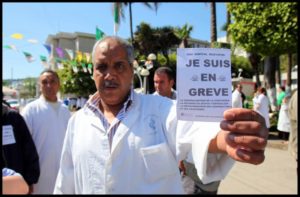 The teachers’ strike that had engulfed Algeria over the past months has raised fears of a lost academic year in the North African country.

Last week, the Algerian government has suspended over 4,000 striking teachers, joining hundreds of colleagues who had walked out months ago amid public spending cuts. The strikers are claiming better salaries and better working conditions.

The government, in crisis because of the fall in oil revenue, wants to raise taxes, freeze some salaries and set a minimum retirement age at 60. Algeria’s economy and stability have been deteriorating in recent months as the government has failed to tackle the country’s economic crisis.

Despite conciliation attempts between the teachers’ union and the government, intimidation and the resort to justice to end the strike continue, according to the National Autonomous Council of Teachers of Higher and Technical Education (CNAPESTE).

According to Algiers, there is no longer any question of negotiating with the strikers, given that justice has ruled that the strike was illegal. Therefore, no negotiation is possible until the teachers put an end to the strike, the government says, vowing to dismiss teachers who do not return to school.

The education ministry announced that about 5,000 teachers have resumed work after receiving the warning. Still, about 19,000 strikers face suspension.

The government resorted to Imam Ali Aya, a well-known religious figure, to mediate between the ministry of education and the unions. But his efforts proved fruitless.