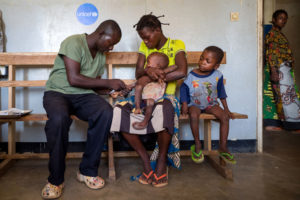 The UN aid chief has warned against the ‘spiralling humanitarian needs’ in DR Congo and urged the international community to help meet these needs as fighting in the country forced 4.5 million people to flee their homes over the past year and left more than 13 million in need of humanitarian assistance.

The UN Emergency Relief Coordinator and UN Under-Secretary-General for Humanitarian Affairs, Mark Lowcock, who has just wrapped up a visit to DRC has called on the international community to urgently address the crisis.

“We heard their heart-wrenching stories, their descriptions of what they need, but also their hopes and their stories of resilience and courage in the face of unimaginable challenges,” said Mark Lowcock, who was accompanied by Mrs Sigrid Kaag, the Netherlands’ Minister for Foreign Trade and Development Cooperation.

With humanitarian needs having doubled since last year, more than 4.6 million Congolese children are acutely malnourished, including 2.2 million severely acute cases. Moreover, epidemics are spreading – counting the worst outbreak of cholera in 15 years.

“What we know is happening in many parts of the country, doesn’t need to persist if we work together,” Lowcock added. “Every vulnerable Congolese family deserves all our support to rebuild their lives.”

Mr. Lowcock and Ms. Kaag Tuesday travelled to Kalemie in the south-eastern province of Tanganyika where they visited the Katanika displacement site and spoke with some of the over 13,000 people who live there, having fled ethnic violence.

They also travelled to the Kalunga displacement site, which, since November 2016, has received nearly 3,500 displaced families. Humanitarian partners there have established education; water and sanitation; and agricultural to help meet the needs of displaced people.

The Government representatives said they would facilitate the work of humanitarian organizations and reduce tariffs for humanitarian imports, including medicines and food.

Humanitarian partners require nearly $1.7 billion this year to address humanitarian needs in the country, including for 4.5 million internally displaced people.

Geneva will host next April 13 the first-ever DRC humanitarian donor conference. The conference is co-sponsored by the European Commission, the Netherlands and United Arab Emirates.