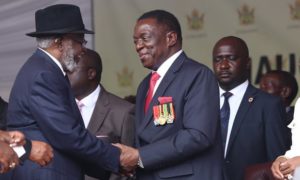 Zimbabwe’s President Emmerson Mnangagwa on Monday said companies and individuals in the southern African nation have returned about $591 million state funds illegally stashed abroad as his 3-month amnesty to bring back the money expired last week.

Emmerson Mnangagwa in November announced a three-month amnesty for the return of public funds hidden abroad by individuals and companies. He had warned that the government would arrest and prosecute those who have failed to comply with the directive.

The new leader who promised to fight corruption and fix the country’s economy said there are over a thousand cases that “require attention and we have so far processed a number of these cases.”

Corruption was prolific under his predecessor Robert Mugabe, who was forced to resign last year after 37 years in power.

Under Mugabe’s regime, unemployment hit 80% and corruption, ranging from the massive looting of state coffers to petty extortion by officials, was rampant.

Since 2009, Zimbabwe has been using the US dollar as its main currency after abandoning its own local dollar. The reserve bank says this has led to massive smuggling to offshore accounts. It estimates that $2bn is illegally held in foreign bank accounts.