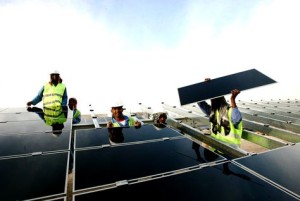 The country has launched its first solar plant, the Sheikh Zayed plant, in Nouakchott with a capacity of 15-megawatt in response to its rising energy demands. The plant is built by Masdar, funded by the United Arab Emirates government and will be operated by the Mauritania’s national electricity company, Société Mauritanienne d’Electricité. It’s the largest photovoltaic solar plant on the continent. It will be increasing Mauritania’s capacity by 10%. The launching ceremony was attended by Mauritania’s president.
The $31,99 million plant will be supplying 10,000 homes in Nouakchott and will displace approximately 21,225 tons of carbon dioxide annually. President Mohamed Ould Abdel Aziz considers the use of renewable energy as “a step towards improving our infrastructure and long-term economic development.” Mauritania’s energy supply is lacking behind its development ambitions because power shortages are recurrent. Energy consumption is rising at 12% per annum obliging the country to do a lot of investment in order to satisfy the increasing demand of its 3,5 million population.
Sheikh Saeed Bin Zayed Al Nahyan, Abu Dhabi’s Ruler Representative, showed appreciation of the support given by Sheikh Mohammad Bin Zayed Al Nahyan, Crown Prince of Abu Dhabi, to the project. He described the plant as “a testament to our strong bilateral relationship with Mauritania and our commitment to helping create a more sustainable future.” He also dwelled on the significance of renewable energy in supporting sustainable development in Africa.
Masdar’s Chief Executive, Sultan Al Jaber, said renewable energy can be “a major contributor” to the solution because developing countries are faced with limited conventional energy. Mauritania has offshore oil and gas, and exploration and production contracts have been signed. Al Jaber pointed out that the country’s energy need is “expected to nearly double by 2030.”