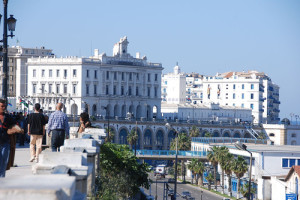 The president of the Algerian Chamber of Commerce and Industry (CACI) and the Portuguese ambassador to Algeria, have called for the strengthening of their economic relations by further enhancing cooperation  in several specialized sectors, during the Portuguese-Algerian business forum organized by the Algerian Chamber of Commerce and Industry (CACI) and the Arab-Portuguese industry. The forum was attended by 30 Algerian companies and 15 Portuguese companies.
President of the CACI, Kellil Tahar, said the economic and trade relations between the two countries “are expected to experience a new growth”, and it will be advantageous to their existing cooperation and partnership. President Tahar and Ambassador Antonio Gamito want cooperation to be concluded in the sectors of food-processing, building and energy. Tahar believes that their economic relations have not reached its desired level although there are “ambitious hopes” to develop it. He urged for the transfer of technology and job opportunities through more partnerships by holding frequent bilateral meetings.
There is a “great potential” for the development and strengthening of the economic and trade relations according to ambassador Gamito. He added that they want to “further develop their partnerships” in several sectors such as “construction, agricultural and food products.” He incited the Portuguese companies to make use of the present relations and agreements because he thinks that there are still “a lot of potentials” in them. The ambassador revealed that many Portuguese companies are interested in investing in Algeria.
Last year, Algeria’s exportations to Portugal were around $1,7billion and its importations stood at $600 million according to figures released by the CACI.