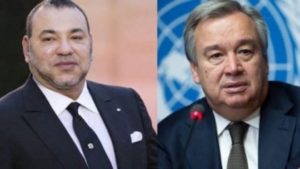 The message draws the attention of the UN chief to the serious developments in the North East of the Sahara territory where the polisario has violated the 1991 ceasefire agreement through a series of incursions and constructions that put regional stability and security at risk.

The Moroccan Sovereign also had a phone call with Guterres, during which he expressed Morocco’s deep concern regarding the Polisario violations in Bir Lahlou and Tifarity in the buffer zone that Morocco had agreed to hand to the UN mission in the Sahara, the MINURSO, for ceasefire monitoring purposes and to avoid any clashes in the area.

The King explained the impact of such incursions by the polisario, as they represent a threat to the ceasefire agreement, violate international law and UN resolutions, and undermining the UN-sponsored political process.

King Mohammed VI recalled, during the phone call, Algeria’s clear responsibility in this regional dispute, which has been dragging on for over 40 years, is clear as “It is Algeria that hosts, arms, backs and supports diplomatically the polisario”.

Therefore, Morocco has kept stressing that Algeria should contribute to the political process and fully uphold its responsibility in finding a solution to the Sahara conflict in a way that is commensurate with its involvement in the genesis and development of this regional conflict.

The Moroccan Foreign Minister who also met the President of the Security Council Peruvian Gustavo Meza-Cuadra showed his interlocutors satellite photos and other documents evidencing the Polisario’s presence east of the Moroccan security wall.

Morocco made it clear that it will not allow any change on the ground. It urged the UN, which is responsible for maintaining the ceasefire, to react to the “real and serious threat to that ceasefire”, warning that if the UN, and the international community do not take their responsibilities, Morocco will take its own responsibility.

The Moroccan Foreign Minister’s meeting with the UN leaders took place the same day the UN Chief conveyed to the 15 members of the Security Council his annual report on the Sahara.
In this report, the UN Secretary General urges Algeria to “make important contributions to the political process” and to step up “its commitment to the negotiation process”.

The report has also reaffirmed that the Sahara issue remains under the sole prerogatives of the UN and called on the Polisario to refrain from violating status of the buffer zone and strip in the Sahara territory.

Guterres pointed out that in the era of global interdependence, “the socio-economic, humanitarian and security consequences of this protracted conflict weigh heavily on regional and sub-regional integration”.

He recommended the extension of the MINURSO mandate for another 12 months (until April 30, 2019), and urged the parties to continue to work with his Personal Envoy “in this new spirit and dynamic and to truly engage in the negotiation process in accordance with the guidelines established by Security Council resolutions”.