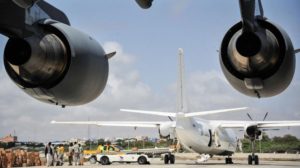 The United Arab Emirates condemned on Tuesday Somalian authorities for seizing one of its civilian aircraft that was carrying millions of dollars, reported WAM news agency.

The UAE Foreign Ministry said in a statement that the jet was seized at Mogadishu airport carrying $9.6 million in cash allocated to support the Somali army and trainees.

The Ministry added that some passengers onboard the plane had been held at gunpoint and assaulted by Somali security forces.

This action is an illegal step that “contradicts the established diplomatic norms and traditions between countries and is a serious breach of the provisions of the Memorandum of Understanding signed between the two countries in November 2014,” the statement said, according to WAM.

The UAE “deplores this violation of international law and norms, at a time when the UAE has provided all kinds of political, economic, military and humanitarian support in the darkest conditions to establish security and stability in the Somali Federal Republic,” WAM added.