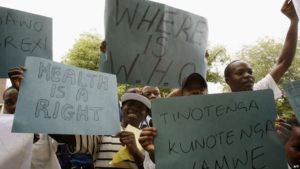 Zimbabwe’s government sacked this week more than 16,000 nurses who went on strike to protest, amongst other reasons, poor working conditions and low salaries.

According to Vice-President Constantino Chiwenga, the nurses had refused to return to work after $17m was released to increase their pay. He described the nurses’ strike as “deplorable and reprehensible.”

Chiwenga, the military general who led the ousting of Robert Mugabe in November, when the army briefly took control of the country, said funds that had been released to meet demands of the striking nurses would now be redirected and allocated towards the recruitment of new nurses.

Government has decided in the interest of patients and of saving lives, he said, adding that unemployed and retired nurses would be hired to replace those fired.

The nurses’ strike came after government gave in to doctors’ demands and hiked their salaries and allowances following a month-long strike.