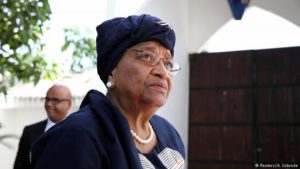 The former president of the West African tiny nation made the statement in Rwanda’s capital Kigali after receiving an award for promoting good leadership on the continent.

Young people today are educated, skilful, demanding, and eventually, “we have to listen,” she said.

The Nobel Peace Prize laureate, Johnson Sirleaf stepped down as president last month, making way for ex-soccer star George Weah. She is only the fifth person to win the 10-year-old Ibrahim Prize for Achievement in African Leadership.

Africa’s first elected female head of state Johnson Sirleaf believes that leaders cannot continue to resist or deny the call for change from their own citizens.

Some African countries have recorded democratic victories in the last 2 years. Regular transfer of power as seen in countries like Mauritius, Ghana, Botswana, Nigeria and Zambia, but elsewhere on the continent, leaders continue to disregard their countries’ own constitutions and laws governing presidential tenure.

In Cameroun, Paul Biya who has ruled the Central African nation since November 1982 is the longest-serving sub-Saharan African president. Presidential elections are scheduled for October and Cameroonians are waiting to hear if the 85-year-old will seek a further term.

The Democratic Republic of Congo’s Joseph Kabila has been in power since 2001. He refuses to go even though he was meant to step down in December 2016.

In Uganda, Yoweri Museveni has clung to power since 1986.

In 2015, Faure Gnassingbe, along with then Gambian dictator Yahya Jammeh, successfully resisted an attempt by ECOWAS to enforce a presidential term limit in all West African countries.

Togo’s president has been in power for more than 12 years. Before that, his father, Eyadéma Gnassingbé, ruled this tiny West African nation of 7.6 million people for 38 years until his death.