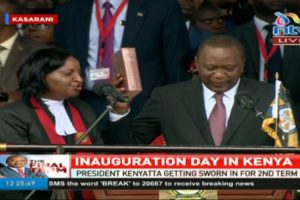 Kenya’s president Uhuru Kenyatta on Wednesday called on Kenyans to forgive him for ‘damaging the unity of the country’ during the East African nation’s last presidential polls.

In his 5th State of the Nation address to the joint session of the National Assembly and Senate on Wednesday, President Kenyatta conceded that last year’s elections threatened national unity.

He called on Kenyans to forgive him if there was anything he said last year that hurt or wounded them. The president appealed to his fellow leaders to consider changing their approach to political competition.

Kenyatta has reaffirmed his commitment to national unity and to work with opposition leader Raila Odinga.

He also addressed the issue of the fight against corruption, which was part of the memorandum of understanding the two leaders signed in March.

He said the county’s economy remained resilient despite the tension during last year’s elections and the GDP grew to 4.9 per cent, while earnings from tourism increased by 20 per cent.

Political turmoil due to the disputed and then re-run presidential election helped cut 2017 economic output growth to the lowest in five years.