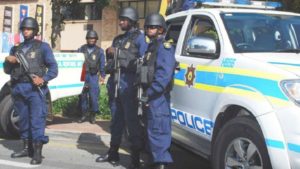 Rwandan police arrested 23 Congolese refugees after two days of clashes in which one refugee died.

Rwandan National Police had reported that one refugee had died and 20 others were injured after its officers were attacked by the refugees in western Rwanda’s Kiziba camp. The camp is home to 17,000 Congolese refugees.

It was not immediately clear what triggered the clash, but according to Reuters, Rwandan officials blamed the refugees for provoking the violence.

The protests followed a decision of the World Food Program to reduce food assistance to the refugees by 25 percent because of a funding shortage.

Some 174,000 Congolese and Burundian refugees living in Rwanda rely on humanitarian assistance for food. They receive either monthly distributions or cash transfers from WFP so that they can buy food in local markets.

Most of the refugees fled Democratic Republic of Congo during bouts of instability there over the past two decades. Escalating violence has displaced more than four million people within Congo, according to the UN.

Violence in Kasai erupted in September 2016 after government forces killed a tribal chief and militia leader. The conflict added to the woes of volatile eastern Congo where rival militia groups fight for control of the mineral-rich area.