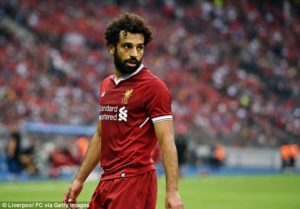 Egyptian international and Liverpool forward Mohamed Salah on Sunday commented on his team’s loss in the European Champions League final and the situation with his injury.

Salah was forced off just 30 minutes into the Liverpool’s game against Real Madrid after he hurt his shoulder in a tussle with Spanish defender Sergio Ramos. The injury has put his participation in Russia in doubt.

On Saturday, Salah’s club manager Jurgen Klopp said the player is doubtful for next month’s World Cup after suffering a shoulder injury.

However, Salah, who scored 44 goals for his club last season, tweeted that despite the disappointment of what he called a “tough night,” he was confident of recovering in time to partake in the Pharaohs World Cup campaign in Russia.

He said despite the odds, he is confident that he will be in Russia to make his fans proud.

Egyptian Football Association also tweeted that Salah’s X-ray showed he had a “sprain in the shoulder ligaments” and that it was “optimistic” he would be fit for Russia.

There were claims Ramos deliberately set out to hurt the Premier League golden boot winner. But Ramos insists it was not his intention to cause injury to his rival. Liverpool lost the final 3-1 to Real in Kiev.

Salah’s goals fired the North African nation to their first World Cup since 1990.