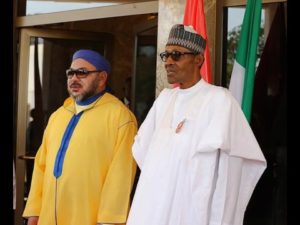 President Muhammadu Buhari of Nigeria is expected in Rabat Sunday for a two-day friendship and working visit to Morocco at the invitation of King Mohammed VI.

The two leaders will hold official talks and will co-chair the signing ceremony of several agreements, the ministry of the Royal Household, Protocol and Chancellery said in a statement.

The Sovereign will offer, at the Rabat Royal Palace, an Iftar (fast-breaking meal) in honor of President Buhari and his accompanying delegation.

The visit reflects the depth and quality of bilateral relations, which are based on a strong and lasting partnership, thanks to the two countries’ shared desire to consolidate their multidimensional relations, the statement said.
In recent years, Morocco and Nigeria have embarked on a new dynamic aimed at enhancing their partnership, serving their strategic interests and giving a boost to regional and continental integration.

This new dynamic, which was made possible thanks to the innovative and active diplomacy led by King Mohammed VI towards African countries, has helped cement links between the two African giants and will undoubtedly benefit African countries and peoples.

Actually, the Rabat-Abuja strategic alliance is not surprising since the two countries are standing out, thanks to the economic progress they have both achieved, as locomotives for the development desired by this changing Africa.
Nigeria is today a leading economic power with a Gross Domestic Product of $ 415.08 billion, according to International Monetary Fund figures.

Morocco, on its part, has managed to consolidate its position as the leading African investor in the continent, according to the 2017 report published by FDI Markets, which stated that Morocco is also a major recipient of Foreign Direct Investments.

The various cooperation agreements concluded between the two countries during the historic visit King Mohammed VI paid to Nigeria in December 2016 constitute an ideal platform for a deployment of the Rabat-Abuja axis on the continental scale.

At the geopolitical level, observers of the African scene in Rabat and Abuja acknowledge the two countries’ positive military and diplomatic influence in the continent.

The successive participations of Morocco and Nigeria in peacekeeping operations around the world, and particularly in Africa, position the two as stabilizing powers not only in the volatile region of the Sahel but throughout the continent.

Besides, the two countries’ activism and their ability to take crucial initiatives in many issues that directly affect the future of the continent in a lofty spirit of openness that cuts with narrow calculations and the two leaders’ commitment to the continent can only benefit the emerging new Africa.

In this context, it is worth recalling the decision of the African Union (AU) to designate King Mohammed VI and President Muhammadu Buhari as African leaders in two issues of strategic importance to the future of the continent, namely the immigration issue and the fight against corruption.

This decision reflects the stature of the two leaders who can actually help the continent regain control of its destiny and occupy the place it deserves in today’s world and in tomorrow’s world.