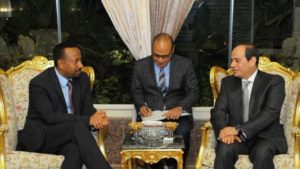 Ethiopia and Egypt agreed to elevate their countries’ relationship to a strategic level of mutual trust, cooperation and support.

The two sides also reiterated their commitment to set up a joint fund for infrastructure development, according to the chief of staff in the office of the Ethiopian Prime Minister, Fitsum Arega.

Earlier this year, Ethiopian ex-PM has asserted that his country will not put Egyptians’ lives at risk, as the disagreement between Egypt, Ethiopia, and Sudan continue over the countries’ shares of Nile waters after Ethiopia completes construction of the Grand Ethiopian Renaissance Dam (GERD).

The Dam, estimated to cost at least $4 billion, will be Africa’s largest hydroelectric infrastructure.

In a gesture of goodwill, Egyptian authorities released 32 Ethiopian prisoners during the Prime Minister’s visit.