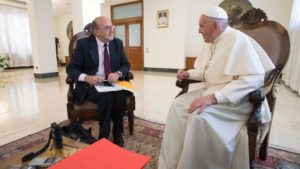 Europe should stop exploiting Africa and invest in ways that benefit the continent more, Pope Francis said in an interview while discussing the migration of Africans to Europe.

According to the Supreme Pontiff of the Universal Church, European countries must invest in Africa, but invest in an orderly way and create employment, “not go there to exploit it.”

Speaking about the reasons for hunger in Africa, the Pope said that “in our collective unconscious there is something inside us that says Africa must be exploited”.

He said Europe needs to focus on education and investment in Africa if it wants to stem the flow of migrants, which is also an increasingly divisive issue in Italy, where the new governing coalition is taking a hard line.

According to estimates, $203bn leave the continent every year.

Some of this is direct, such as $68bn in mainly dodged taxes.

Also, $29bn a year is being stolen from Africa in illegal logging, fishing and trade in wildlife. $36bn is owed to Africa as a result of the damage that climate change will cause to their societies and economies.

Africa’s people are effectively robbed of wealth by an economy that enables a tiny minority of Africans to get rich by allowing wealth to flow out of Africa.