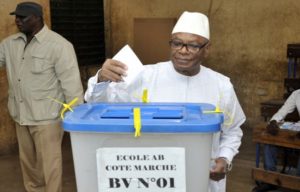 The UN human rights office on Tuesday said killings of almost 300 Malian civilians in fighting between rival militias this year, could threaten the outcome of the upcoming presidential polls in the war-stricken nation.

Mali’s incumbent president Ibrahima Boubacar Keita, who took office in 2013 and opposition frontrunner Soumaila Cisse are expected to be the two main candidates in the July 29 polls out of a field of 24 hopefuls.

Mali’s government has repeatedly said the polls will go ahead as planned, but less than two weeks before the polls, the country is still mired by governance and security problems.

According to UN human rights spokesman Rupert Colville who was citing investigations by the peacekeeping mission MINUSMA, at least 289 civilians have been killed in 99 incidents of communal violence since the start of the year. About 75 percent of the incidents occurred in Mali’s central Mopti region, with more than half taking place since May 1.

Campaigning for the first round of the election will end on July 27. A UN peacekeeping mission took over from the French and African troops on July 1, and will support the army in securing the poll.

The Malian army, French soldiers and a UN mission still have little control over large tracts of the country. Regional elections, already pushed back from December to April, were again postponed in March.