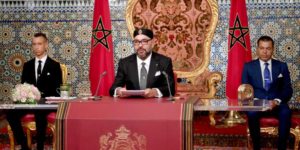 King Mohammed VI of Morocco has outlined a six-pillar roadmap to remedy the shortcomings of the educational system and training programs that leave graduates on the dole while businesses are having difficulty finding the skilled resources they need.

“We cannot let our education system continue to produce unemployed people, especially in certain branches of study, where graduates – as everyone knows – find it extremely hard to access the job market,” said the Monarch in a speech to the Nation on the occasion of the 65th anniversary of the Revolution of the King and the People, celebrated Monday.

Not only is this an outright waste of public resources and of young people’s energies, but it also hinders development and affects the living conditions of many Moroccans, he said, noting that “strangely enough, many investors and businesses are having difficulty finding the skilled resources they need in a number of trades and specialized sectors”.

He called on the government and other stakeholders to take a series of measures as soon as possible to address “the chronic problem” of ensuring that skills match labor market needs and also to reduce joblessness.

The first of the measures advocated by the king is to undertake a comprehensive review of public mechanisms and programs for youths’ employment so as to make them more effective and to ensure they satisfy more adequately young people’s aspirations.
In this vein, he announced that a national meeting on employment and training would be convened before the end of the year to make practical decisions, devise new solutions, launch initiatives and chart a specific roadmap to improve the employment situation.

Another measure he called for consists in giving priority to specialties which create jobs and develop an effective means of giving students career guidance“to help them choose between academic studies and vocational training, depending on their abilities and personal preference”.

Concurrently with that, the King called for the adoption of a framework agreement, involving the government and the private sector, to give a strong impetus to the re-training of students who drop out of school so that they may be given a second chance at professional and social integration.

The Sovereign also underlined the importance of carrying out a thorough review of vocational training programs to align them with the needs of businesses and the public sector, and to make sure they are adapted to changes in industry and trades in general, thereby increasing the chances of graduates to access professional life.

“Further attention therefore needs to be given to vocational training at all levels, and to creating a new generation of centers for the vocational training of young people, keeping in mind current needs as well as the particularities and expectations of each region,” the King said.

King Mohammed VI also called for developing practical mechanisms likely to help achieve a qualitative leap in terms of motivating young people to set up small and medium-sized enterprises in their fields of competence, in addition to promoting self-employment and the creation of socially responsible businesses.

The informal sector was also brought up by the Monarch who pointed out that this sector necessitates integration in the formal economy “by providing proper, motivating training to people involved in the informal sector, as well as social security and assistance for self-employment and business creation.”

To promote youths’ qualifications and therefore job opportunities, the Monarch stressed the need to establish a compulsory three-to-six month foreign language course at each training institution and include foreign language learning at all levels of education, especially in technical and scientific branches.

Deploring that many young people, especially those with advanced university degrees, are considering leaving the country, while a number of Moroccan students abroad do not come back home to work once they graduate, the King called for a serious, responsible approach to deal with the issue and to offer the attractive incentives needed as well as the appropriate inducements to encourage qualified people to settle in Morocco and work here.

“We must give our young people what they need in the areas of education, employment, health and so on. More importantly, we must enhance their confidence and give them hope in the future,” said the King, underlining that he has always regarded young people as the country’s true wealth.

Posted by Hafid El Fassy on August 21, 2018. Filed under Columns, News, Zoom. You can follow any responses to this entry through the RSS 2.0. Both comments and pings are currently closed.