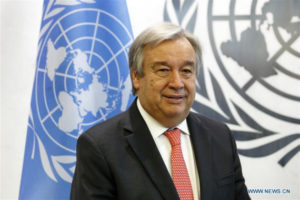 The United Nations Secretary General Antonio Guterres has recalled in his annual report on the Sahara issue to the 73rd session of the UN General Assembly the terms of reference set by Morocco and quoted large extracts from the Speech delivered by King Mohammed VI on November 6, 2017.

The Secretary-General indicated in this regard that the Monarch emphasized that “Morocco remains committed to engaging in the political process, and the current dynamic wished for by the Secretary General, and to cooperating with his Personal Envoy”.

This commitment, as stated by the King in his royal speech, and as reflected in the report of the Secretary-General, is based on the Kingdom’s fundamental principles concerning the Sahara issue. Among these principles a clear “No” to any solution to the Sahara question other than within the framework of Morocco’s full sovereignty over its Sahara and the Autonomy Initiative, which has been declared serious and credible by the international community.

Other principles include the need for all parties to assume their responsibilities with a view to finding a definitive solution to this regional dispute, considering the Security Council as the only international body tasked with overseeing the settlement process, and the rejection of any obsolete proposal designed to divert the settlement process from the set terms of reference.

The UN Secretary General also highlighted in his report the Kingdom’s commitments to pursue the socio-economic development of its Southern Provinces, as emphasized in the Royal Speech, namely that “Morocco will not sit by and wait for the desired solution to be found”. Instead, Morocco will press ahead with its endeavors to promote the development of its southern regions and turn the Sahara into an integrated economic hub that will enable the region to play its role as a link between Morocco and countries further down in Africa.

The UN Secretary-General underlined the calm that reigned in the Moroccan Sahara during the period covered by this report.

The report also surveyed the first regional tour of the UN Secretary General’s Personal Envoy, Horst Köhler, conducted in October 2017. it recalled in this connection that Moroccan authorities reiterated Morocco’s support for the Personal Envoy’s efforts, reaffirmed that Morocco remains “determined to find a political solution to the conflict, on the basis of the 2007 Moroccan Autonomy Initiative” and stressed the need that “Algeria plays a more important role in this context”.

The document likewise mentioned Köhler’s second tour to the region last June, during which he visited, among others, Rabat and the Southern Provinces.

Similarly, the report referred to the adoption, on 27 April 2018, of Security Council Resolution 2414, wherein the UN Executive Body stresses that progress should be made in the search for “a realistic, pragmatic and sustainable political solution” and calls for “realism and a spirit of compromise”.

The Secretary-General’s report reaffirms, once again, the definitive burial of earlier, obsolete and inapplicable plans the other parties stick to. Indeed, the Secretary-General makes an exclusive reference to Sec urity Council resolutions adopted since 2007 as the basis of the current political process.