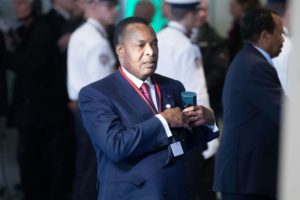 President of the Republic of Congo Denis Sassou Nguesso will seek Chinese support for its negotiations with the International Monetary Fund about a bailout, a government spokesman told Bloomberg.

According to Thierry Moungala, Brazzaville will solicit China’s support during the China-Africa Cooperation Forum to be held in Beijing September 3 to 4.

Congo is seeking to restructure its debt with commodities trading houses after borrowing $2 billion from merchants including Trafigura and Glencore. The bulk of its external debt, however, is owed to Chinese entities.

Talks on support began last year, but within a few months, the IMF called for action on tackling corruption, debt and poor governance before considering any bailout. Last year, the Washington-based fund accused Congo-Brazzaville of having hidden part of its debt from the organization by claiming it was 77% of GDP. The IMF said the ratio is 117%.

According to Bloomberg, the continent’s fourth-largest oil producer owes creditors at least $9.14 billion and has been trying to secure funding from the international lenders since March 2017 to revive an economy that contracted for the past two years.

Sassou Nguesso, 74, is one of the world’s longest-serving leaders. He was re-elected in March 2016.