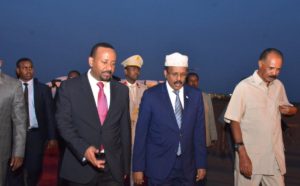 Somalia, Ethiopia and Eritrea have agreed on Tuesday to initiate dialogue to resolve a border dispute between Eritrea and Djibouti, Abdinur Mohamed, the communications director in the office of the Somali president said.

The leaders of the three Horn of African nations met in the Eritrean capital of Asmara and agreed to resolve the impasse in the interest of peace and development in the region.

Djibouti accused Eritrean troops of occupying the Dumeira mountain area shortly after Qatar withdrew its 450 peacekeeping troops from the border last year. Between 2010 and 2017, Qatar attempted to mediate the settlement but that effort failed.

As a reminder, Ethiopia’s reformist Prime Minister Abiy Ahmed signed a five-point end of war agreement with Eritrean leader Isaias Afwerki during a historic visit to Asmara in July. Afwerki reciprocated the gesture with a three-day visit to Addis Ababa. During the visit, the Eritrean embassy in the Ethiopian capital was officially reopened.

And this Thursday (Sept.6) the leaders of Ethiopia and Eritrea were present at the official reopening of the Ethiopian embassy in Asmara, a significant leg of the peace deal reached in July 2018.