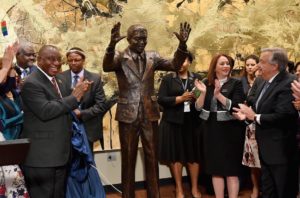 The 1.8 meter- tall Nelson Mandela Statue was erected in celebration of what would have been Mandela’s 100th birthday this year.

Speaking at the unveiling, Secretary-General Guterres highlighted Mr. Mandela’s humility as a hallmark of his greatness.

“When he achieved the pinnacle of power as president of his beloved country, Madiba set an example that still resounds throughout Africa and the world – he stepped down after one term, confident in the durability of South Africa’s newfound democracy … He did not pursue power for its own sake, but simply as a means of service,” said the UN chief.

The UN General Assembly also honored Nelson Mandela with a pledge to build a just, peaceful and prosperous world and to revive the values for which the former South African President and anti-apartheid campaigner stood.

At the Nelson Mandela Peace Summit, Member States adopted the first resolution of the General Assembly’s 73rd session, “committing to demonstrate mutual respect, tolerance, understanding and reconciliation in [their] relations.”

The UN has declared 2019-2028 as the “Nelson Mandela Decade of Peace” and issued a political declaration to promote disarmament.

The declaration adopted at Monday’s peace summit identified the personal qualities of Mandela, who spent decades in prison for his stand on Apartheid that made him a transcendent humanitarian.