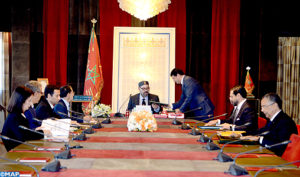 King Mohammed VI chaired, on Thursday in Rabat, over a working session on the implementation of the renewable energy strategy, said a statement by the royal office.

This working session is part of the regular follow-up by the monarch regarding the effective and operational implementation of the renewable energy strategy.

The objectives set for the year 2018 were reached within the deadlines defined at the working session the Sovereign had presided last April, the statement said.

Part of these objectives, the entire Noor Ouarzazate solar complex (580 MW) became operational, reinforcing, with the successful synchronization of the Noor Ouarzazate III tower, its position as the largest operational solar multi-technology complex in the world.

The Noor Laayoune I and Noor Boujdour I solar power plants were also completed for a combined capacity of 100 MW. These two power plants were built under an innovative financing plan that used the first green bond issue in the Kingdom. These plants are part of the first projects launched under the new development model of the southern provinces, to which over 77 billion dirhams have been dedicated to improve infrastructure, investment climate and the inhabitants’ living conditions.

During the working session, president of the Moroccan renewable energy agency MASEN, Mustapha Bakoury, presented to the Sovereign the timetable for the implementation of the Noor PV II program and the construction works of the solar complex Noor Midelt, which bring, thanks to the hybridization of solar, thermal and photovoltaic technologies, an optimized response to the needs of the national network.

Regarding wind projects, the King was informed of the overall progress of the integrated wind program. The launch of the construction works of the Midelt wind farm (180 MW) and the Taza wind farm (100 MW) is scheduled for the first half of 2019.
The year 2019 will be also marked by increasing the capacity of the Koudia El-Baida wind farm, the first wind project developed in Morocco and operated in 2000 by the ONEE, from 50 to 120 MW. This upgrading will use the latest technological advances in this area and improve the development of the wind energy resources in the northern provinces of the Kingdom. This is a first in Africa and the MENA region.

During the working session, King Mohammed VI gave his instructions to up the initial ambitions related to renewable energy to exceed the current goal of 52% of the national electric mix by 2030. The Sovereign instructed in this connection the Head of Government to promote the use of renewable energy in public administrations and buildings to maximize energy efficiency and achieve significant savings.

Similarly, the Sovereign stressed the need to adopt an additional integrated program to back all the scheduled water desalination plants with renewable energy production units to ensure their autonomy and save energy. These plants should rely primarily on the energy sources available nearby, like the wind power plant in Dakhla, or even the exploration of new sources of energy such as the waste energy transformation (Biomass) in big cities like Casablanca, the King explained.