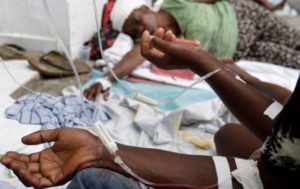 The Democratic Republic of Congo has recorded 857 cholera deaths since the beginning of the year, the World Health Organisation said on Thursday.

The statistics released by the UN body show over 25,000 officially registered cases in the war-torn nation. At least one case has been reported in 21 of the country’s 26 provinces, with Kasai Oriental, Lomani, South Kivu, Tanganyika and Haut-Katanga being the most affected.

The epidemic has now reached the country’s capital, Kinshasa. This megapolis of 12 million people is the nerve center of the country’s trade and is home to one in every six Congolese.

According to the WHO, the victims live in areas generally close to large rivers and have a deficient drinking water supply system.

The WHO’s local office warns that over 15,000 more cases are expected in the country over the next six months.

The WHO alarming report comes a week after the government admitted that the country’s tenth Ebola outbreak is now officially its worst ever, after the number of confirmed infections crossed the 300 threshold. The virus has killed 211 people, the ministry of health said.

The surge in new Ebola cases has been reported in a densely populated Congolese city, adding a dangerous dimension to the worst outbreak of the virus in the country’s history.

In another development, the United Nations and diplomatic sources said on Thursday that at least seven UN peacekeepers were killed in clashes with militias in an area that is at the center of the Democratic Republic of Congo’s worst Ebola epidemic.

“Our peacekeeping colleagues tell us that six peacekeepers from Malawi and one from Tanzania who are part of the UN peacekeeping operation in the DRC … were killed yesterday, in Beni territory, in North Kivu,” UN spokesman Stephane Dujarric told reporters in New York Thursday.