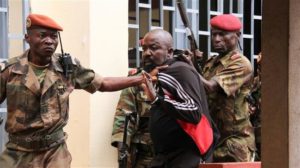 A former militia leader in the Central African Republic (CAR) has been extradited to the International Criminal Court (ICC) to face trial for crimes against humanity.

Alfred Yekatom, aka Rambo, arrived at the detention center of The Hague on Saturday.

The 43-year-old former army officer is accused of ordering some 3,000 anti-Balaka Christian forces to carry out deadly attacks against Seleka Muslims between December 2013 and August 2014 in the capital Bangui and other locations in the mineral-rich nation.

Rambo who was elected to parliament in 2016 must answer in court for his actions, the court’s chief prosecutor, Fatou Bensouda, said in a statement.

The Hague-based court cannot undo the suffering that has been inflicted on victims, “but we remain committed to doing our part to advance justice and accountability in CAR,” she said.

The Central African nation descended into chaos in 2012 when Seleka rebels overthrew the legitimate government. Over the two years that followed, a civil war brought roughly 5,000 casualties and displaced more than a million people.

After the UN deployed 12,000 peacekeepers to stop the violence, Faustin Archange Touadéra won the 2016 presidential elections. However, vast portions of the country are still under rebel control. The CAR is rich in oil, diamonds, gold and uranium.