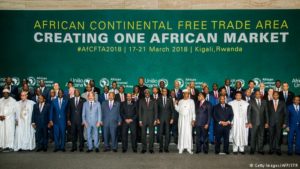 The instrument of ratification was deposited on the margins of the 7th African Union Meeting of Ministers of Trade (AMOT) taking place in Cairo, Egypt, which got underway on Wednesday.

The deposit of the instrument means that South Africa has formally and legally committed to the TFTA, which was launched in June 2015 in Sharm El-Sheikh.

South Africa is the fourth country to deposit the instrument of ratification. The other three countries are Egypt, Uganda and Kenya. Six other countries are in the process of depositing their instruments.

“It was the tripartite initiative that led to the work of broadening the integration beyond our existing regional communities and working towards the establishment of large free trade areas across our continent, the initiative that is now taken forward by the African Union,” he said.

The TFTA has a combined gross domestic product of $1.2-trillion and a combined population of about 626-million people, which is over half the total African population and economy.