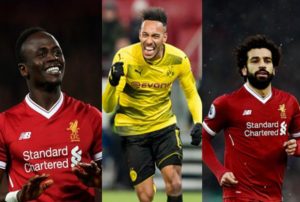 Reigning Confederation of African Football Player of the Year, Mohamed Salah, Senegalese player, Sadio Mane and Gabonese player, Pierre-EmerickAubameyang, are the best players of the continent in 2018, CAF said on Tuesday.
According to the African football governing body, the three players were the top three finalists for last year’s awards.
The awards gala night is scheduled to hold on January 8, in Dakar, Senegal.
Arsenal forward 29-year-old Mohamed Salah will be hoping to lay his hands on the enviable crown a second time. Salah entered the history books after emerging the first Egyptian to be crowned the continent’s top player since the awards debuted in 1992.
Gabonese star Aubameyang, 29, will be praying for a second title after making the top three final shortlist since 2014.
Senegal’s Sadio Mane is also making a return to the top three, coming third in 2016 and second in 2017 respectively.
Senegalese El HadjiDiouf (2001, 2002), Samuel Eto’o of Cameroon (2003, 2004) and Toure (2011, 2012) are the only three to win successive titles.
Nigerian duo Asisat Oshoala and Francisca Ordega, and South African Chrestinah Thembi Kgatlana have made the final three for the Women’s Player of the Year 2018.