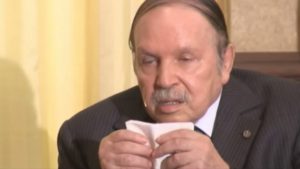 Hundreds of Algerians staged demonstrated Saturday in several provinces and also in some European capitals, including Paris, to voice opposition to President Bouteflika’s candidacy for a fifth term in office despite his poor health condition.

Bouteflika early this month confirmed his plans to seek a fifth term in office after his candidacy was proposed by the ruling coalition.

If he wins, and he probably will, the 82-year old leader will run a country he has been heading since 1999.

The fifth candidacy comes as the former army leader finds himself disabled as 2013 stroke impaired his mobility and speaking capacity.

Thousands of Algerian believe that the President cannot rule the country. Early this month, the country’s main Islamist opposition party, Movement for the Society of Peace (MSP) criticized the candidacy noting that Bouteflika was being held hostage by his entourage.

“Bouteflika is not able to continue to govern because of the nature of his illness,” the Islamist party said in a statement.

“His candidacy for a fifth mandate is not in his interest, but in the interests of those who benefit from this situation,” the party added.

Some of the protesters during the Saturday demonstrations in Kherrata in the Bejaia reportedly called the President “Moroccan” over his Moroccan roots.

Bouteflika was born in 1937, in Oujda, northeastern Morocco. The Algerian leader has however repeatedly rejected his Moroccan origins.