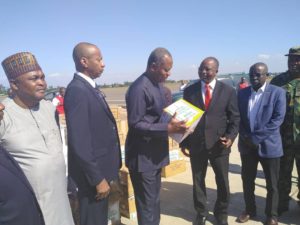 The federal government of Nigeria has donated tons of medical supplies and half a million dollars to cyclone-stricken Mozambique and Malawi.

In both countries, Onyeama stressed that the support was a show of brotherhood and solidarity at a critical time for the two countries.

At the time, the World Meteorological Organization called it one of the worst weather-related disasters to ever strike the southern hemisphere.

Nigeria’s donation comes on the back of extensive pledges by the United Nations, and other international partners in ramping up financial and material support for the affected countries.

The UN pledged to release $13 million to pay for food, shelter, health, water and sanitation assistance in Mozambique and Comoros.

South Africa has deployed the army to help Mozambique manage the unfolding crisis.

According to the UN Office for the Coordination of Humanitarian Affairs, more than 747,000 people are living within the Cyclone’s path in Mozambique alone.