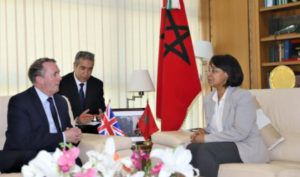 “This meeting was an opportunity to review ways to foster the relation between Morocco and the United Kingdom in the economic, political and commercial fields, as well as in terms of investment,” Fox told the press at the end of this meeting.

The talks also focused on expanding cooperation between the two countries in other areas, notably in free trade, given the shared interests and values by Morocco and the United Kingdom, added the British official.

“Morocco has a huge potential in a number of sectors, notably agriculture, financial technology and education,” said Fox, adding that the Kingdom offers opportunities in other areas that will allow it to grow quickly, create more jobs and become more prosperous.

Fox also expressed his country’s desire to become the largest investor of the G7 in Africa, saying that Morocco is the best gateway to the African continent.

The two officials voiced shared willingness to continue efforts to boost cooperation between the two countries in the fields of agriculture and fisheries in the short and medium terms.